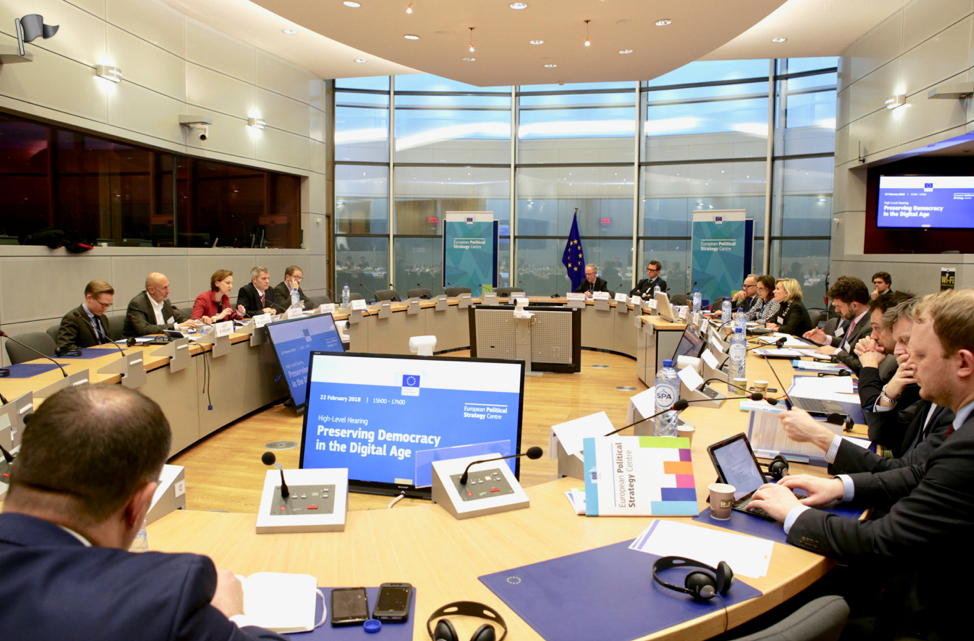 The ETC’s Philip Lelyveld was one of five subject matter experts invited to speak before the EU’s “Preserving Democracy in the Digital Age” hearing at the European Political Strategy Centre in Brussels on February 22, 2018. The EU is working to understand and deal with the problem of ‘fake news’ and Russian interference in democratic processes in Europe. This one-day event is part of an ongoing multi-organization effort within the EU.

The invited speakers were:

• Rasmus Kleis Nielsen, Professor of Political Communication and Research Director, Reuters Institute for the Study of Journalism, University of Oxford

Philip was invited to present an outsider ‘Hollywood’ perspective. He defined ‘fake news’ as data or information that is 1) verifiably false and/or 2) partially reported and taken out of its original context in a way that distorts its original meaning. The tools to create fake news, including faking a person’s audio-visual record and adding or deleting elements within a live video feed, are advancing to the point where even experts will soon have trouble identifying what is fake versus what is real. We are moving into a ‘post-evidence’ world.

A good story captures and holds your attention and creates ‘sticky’ memories by engaging your emotions.  He said that we are well on our way to developing and deploying the tools that will allow anyone to create and distribute personalised ‘sticky’ memories on a global scale.  The tools don’t care whether the story is fact or fiction, true or false.

In his testimony, Philip highlighted the point that innovation is never stifled. It is only redirected by regulation, the bottom-line imperatives of business, and societal forces.  The purveyors of fake news are innovators.  The way to counteract their efforts is to out-play them.

It may make more sense to create a system that identifies, elevates, and rewards a bounded set of data, information, and knowledge that we can verify to be true, reliable, and undistorted, than to try to detect and react to an unbounded flow of false, distorted, and fake content, he said.

Philip suggested one possible strategy for counteracting fake news in a manner that protects democratic processes without diminishing online freedoms:

The storytelling arts and sciences have regularly evolved to keep up with the rising sophistication and expectations of our audiences. Similarly, if you are going to detect and respond to the outsider innovators and storytellers propagating targeted psychological manipulation tools including fake news, then you have to put in place technical and social processes that can also evolve to stay one step ahead of them and that contribute to helping the average citizen make informed decisions based on reliable data.

The EU will publish a transcript of all of the speakers’ comments and will draft a high-level summary document to move their internal effort forward.  They would like to continue seeking the input of the ETC@USC as their effort progresses.

One immediate result of Philip’s presentation in Brussels was a meeting with Dr. Antti Sillanpaa, the Branch Chief of the NATO Strategic Communications Operation, and his team.  They were in Los Angeles as part of a ‘fake news’/’Russian meddling’ fact-finding tour of the west coast.  Their tour included visits to the Rand Corp, Facebook, Google, Twitter, and other companies.  The team met with Philip at the ETC for an hour on February 26th.  The discussion continued the following night at a dinner at the Finnish Consulate, which the ETC’s Erick Moen also attended. Dr. Antti Sillanpaa and his team were impressed with the unique ‘Hollywood’ perspective that Philip and Erick brought to the discussion and would like to loop back to them as their efforts progress.